I have known Victor Kung from VK Music for several years through CAF and he has always in his very gentle way said I should get one of his amps. I borrowed the TU-8600 300b SET from Gary Gill for a speaker review and it performed beautifully. So I threw caution to the wind and took the plunge and bought the new TU-8800 kit. I am an experienced builder starting with Heathkit and Eico’s in the early 1960s and continuing to present day with a few scratch builds under my belt. 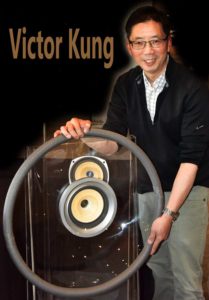 This kit is big. Even though there are only four tubes there are a lot of parts. When looking at the kit as a whole it seems a bit intimidating even to an experienced builder. But with further examination, the project is laid out into small easily handled sections. I decided to work with small goals in mind, taking my time, and enjoying the process. I purchased all the options available. Lundahl output transformers, special Takman resistors, Mundolf Silver Supremes coupling caps, Mullard tubes, and TDK volume pot. Victor assured me this is the way to go. If money is tight, I suggest get at least the resistor upgrade with your initial purchase. The other upgrades can be easily accomplished at a later date, but all those resistors not so much. 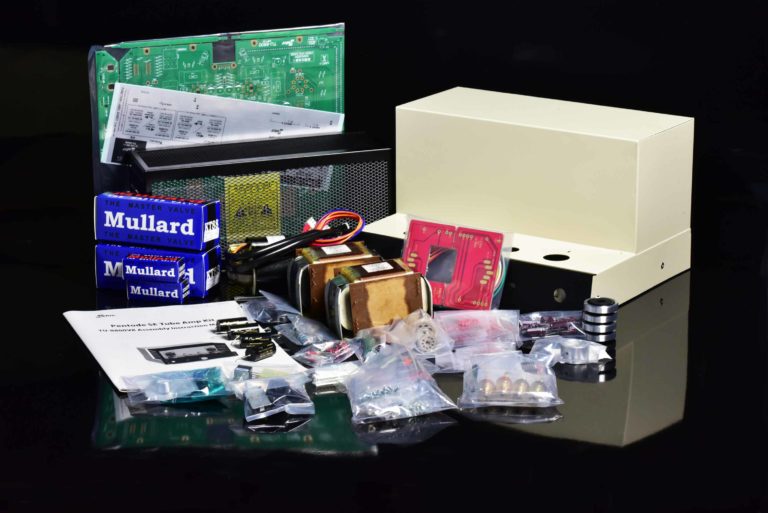 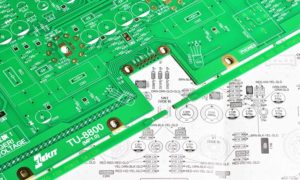 The kit was delivered from VK Music in Vancouver, BC, tripled boxed and extremely well protected and well packed. I suggest you should spread everything out and go completely through the build manual and familiarize yourself with all the parts and the flow of the build. The build manual is very detailed. There is no step by step directions like the old Heathkit books but components are packed in plastic baggies that correspond to sections on the build pages in the manual. 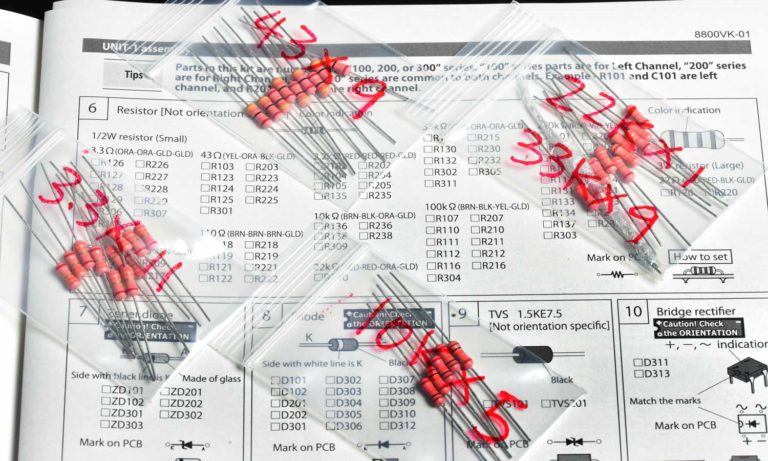 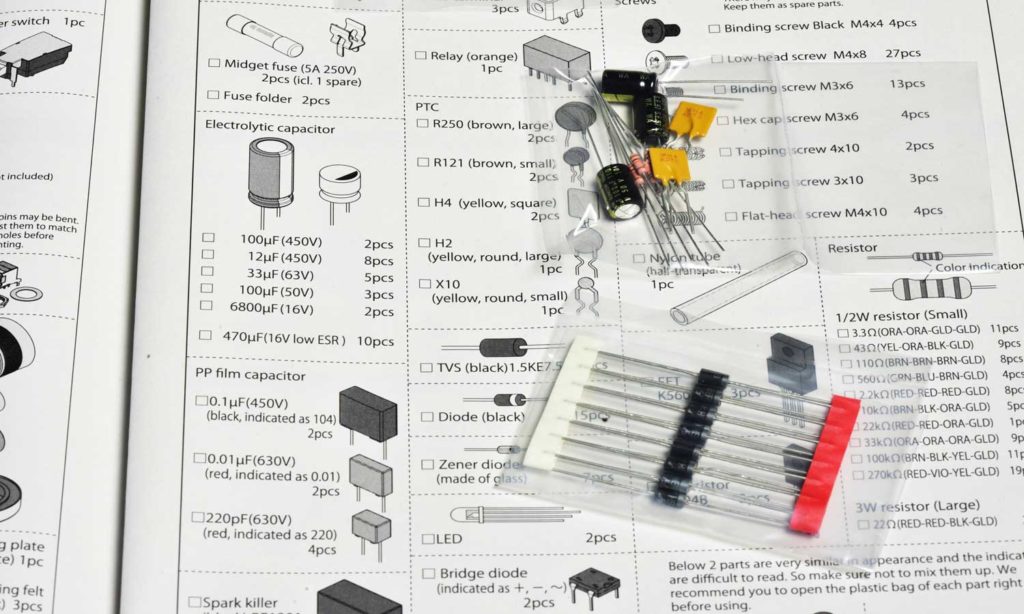 My first build session was mounting the resistors to the main board. They came packed in individual baggies marked with quantity and values. The game plan is to solder in all the resistors of the same value across the board, before moving onto the next value/bag. So installing eighty-seven resistors was enough for the first session. I took my time double-checking myself to make sure I have the right part. You have to play “Where’s Waldo” searching to find where the parts go on the board, put it place and solder. You soon develop a rhythm and decide how many you mount before going back and solder.  I relied on the fact that this is a stereo amp so most parts have a mirror image partner on the other side. Some parts are common between the channels. They came up with a numbering system to give you hints. The 100 series is the left channel, the 200 series is the right channel and the 300 series is common most often in the center.  It’s a game and you need to get into the proper mood to enjoy it. There is nothing difficult here, just there are a lot of small and simple operations to go through to get it done. I can see the logic of doing the resistors first. It was the longest and most tedious part for me. After the resistor page, the rest was a piece of cake.  I chose to do a page a day. I put on some straight-ahead Jazz and kept an easy and steady pace, taking breaks by getting up and walking around a bit. There is absolutely no reason to rush the build. It’s a process to enjoy. And I was listening to great music, whats not to like. 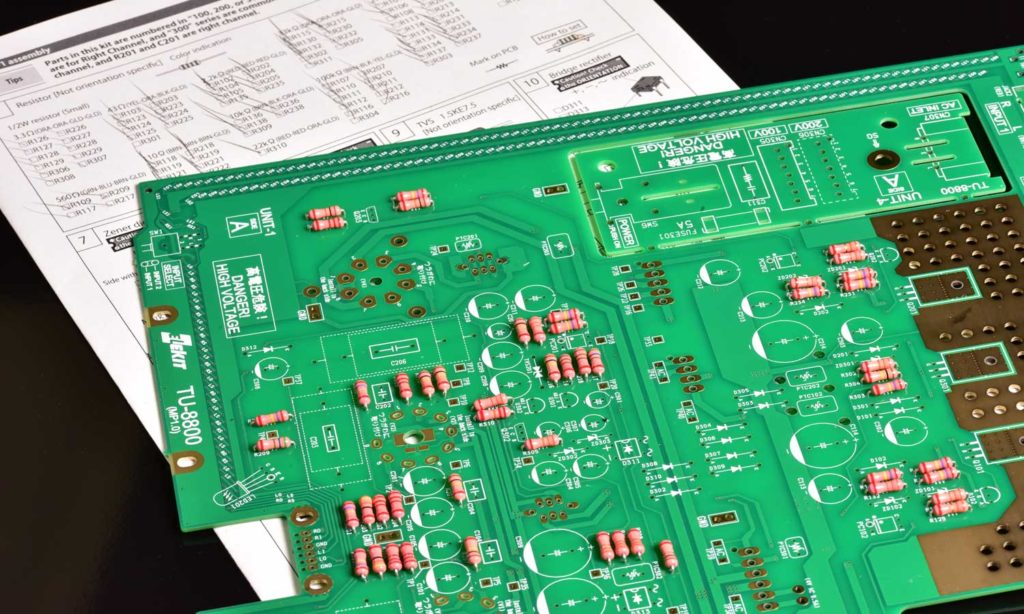 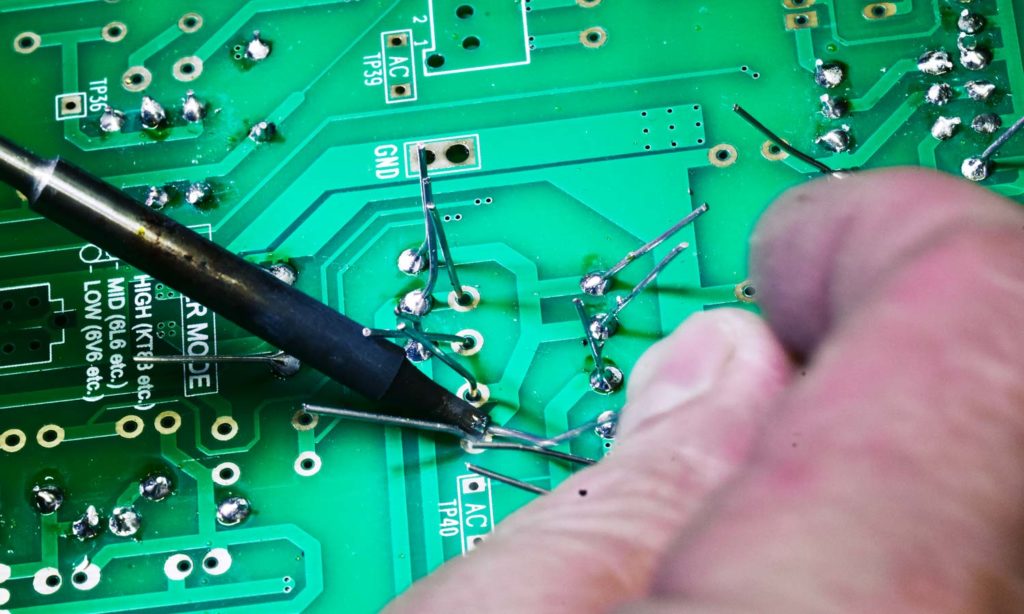 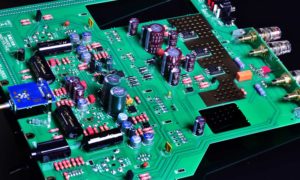 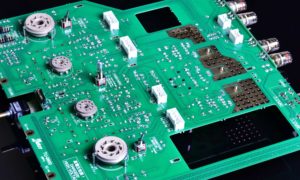 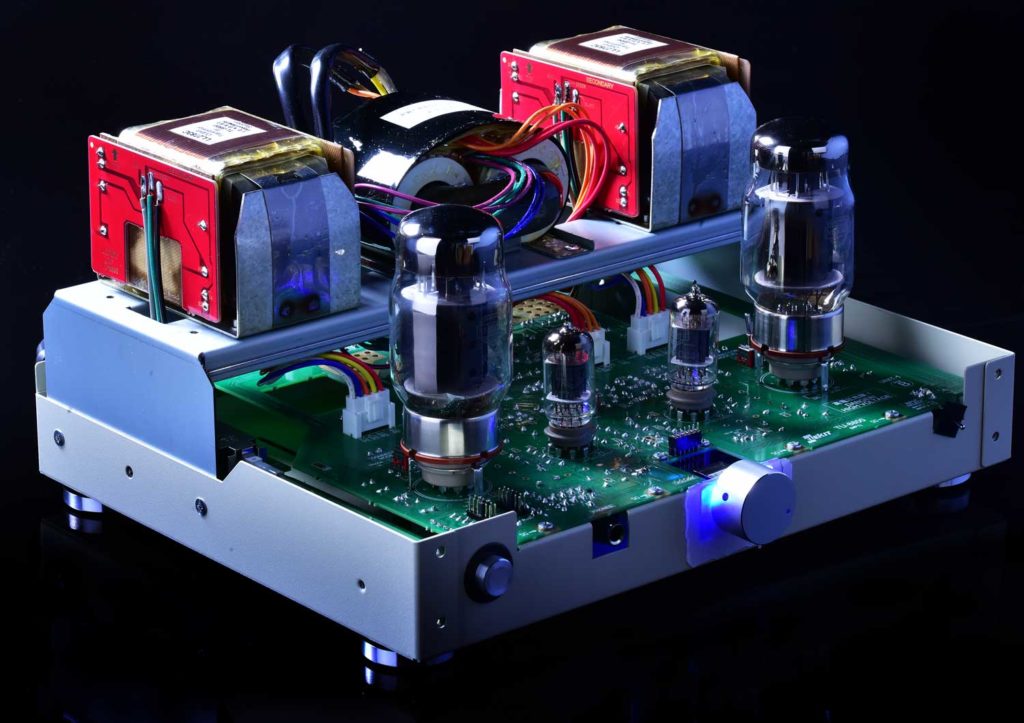 Day two was most of the capacitors, diodes, and voltage regulators. When working with through-hole printed circuit boards you always mount the smallest parts first,  otherwise, it’s difficult to mount a small resistor next to a big cap.

Day three was tube sockets, switches, etc. also the three transformers which are mounted to a sub-assembly.

Day four was a final check with a magnifying glass to check out every solder joint to see if the solder flowed nicely and there were no solder bridges between the solder pads. Final assembly went smoothly, all the parts fit easily and screw holes lined up properly for a nice tight and secure chassis. I felt pretty confident, with all the sections of the build manual checked off. So I put in the tubes, hooked up a pair of small test speakers that live at my testbench, and an mp3 player for a source. I hit the on-off button and I was rewarded with the glow of the tubes and no smoke (lol). I was soon hearing music out of the test speakers. A big sigh of relief. I then moved on to the voltage checks. There are around thirty test points on the main PCB(printed circuit board). You have to be careful here and should have some experience under your belt before you go poking around with a voltmeter. There are very high voltages here. I went through the checks and everything was with-in tolerance, so I padded myself on my back and move the amp to my main system.

This is a very versatile amplifier. First, there are two inputs selectable by a small switch on the right side of the front bezel. So this means if you just have two sources you do not need a preamplifier. You have a choice on input “TWO” with either RCA jacks or a mini-jack where you can plug in a portable music player. There is a centrally mounted volume control. Like many KT88 amps these days you have a choice of two modes. Either triode or ultra-linear. With Kt88 in Ultralinear mode, you have 12.5 watts per channel. There is a power mode switch on the top plate in the middle between the driver tubes. This allows for a wide variety of power tubes from 6V6’s to KT150. This is a tube roller’s delight. 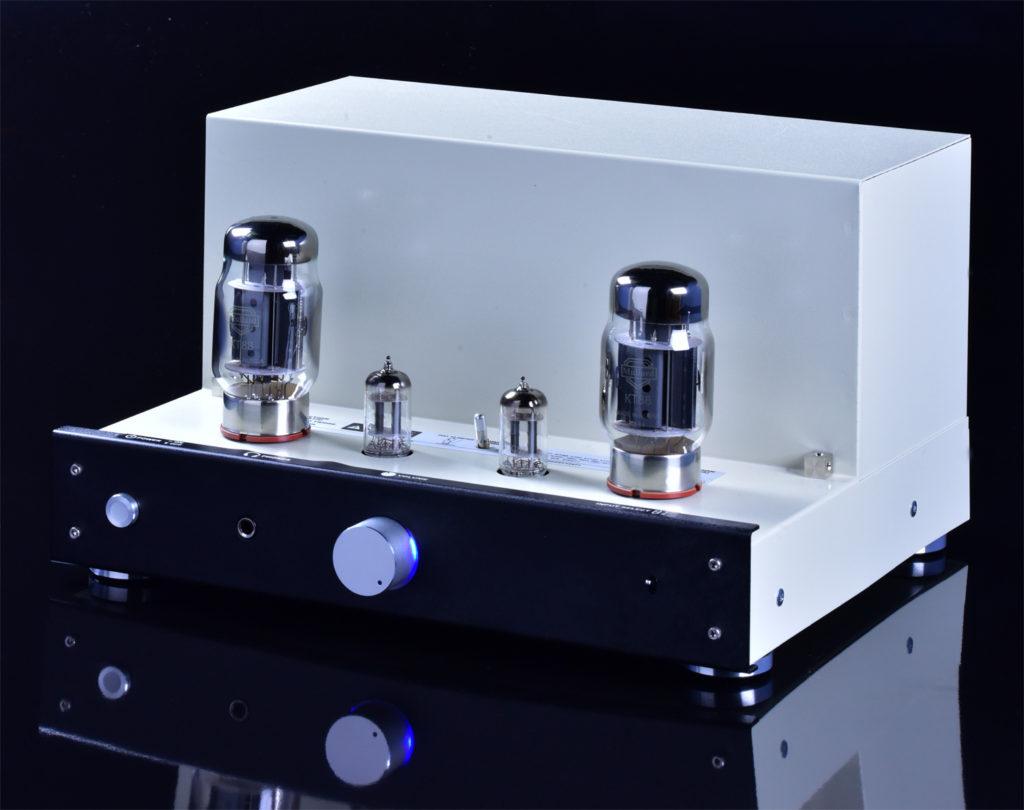 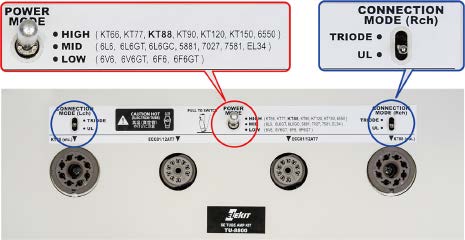 Of course, you do not listen to just one piece of kit. You listen to the whole system/room. I am in the process of putting together an new system to review like products for this website. The TU-8800 may well become my reference amp and listened to it a lot during my review of the Spatial Audio M3’s and the LTA microZOTL preamp. I wanted to concentrate just on the amp and take the room and speakers out of the sonic picture. I took a look at the schematic and saw that the headphone output is derived right off the output transformers with the addition of a small resistor network where you set the headphone level by moving a couple of jumpers on the main circuit board. So I felt pretty confident that would be a valid way to evaluate the amp. Setting up the proper gain for the headphones is a bit of a PITA because these jumpers are only accessible by removing the chassis top. It would be so much better to have this accessible through dip switches without taking the amp apart. This is not a problem if you own only one pair of headphones but if you do have many pairs with different sensitivities, well you get the picture.

With all the different modes available to the TU-8800 I decided to start in the “Mid” power position which I found a slightly better midrange presentation with using the supplied Mullard KT88’s. The “Ultralinear” mode gave a more alive sound than the “Triode” mode. The “Triode” mode also tended to be just a bit soft at the frequency extremes. The “Mid” power position was just slightly lower in volume than the “High” power position. One can certainly tune this amp for one’s system.  With six different modes and a large variety of tubes to roll in, there is an unlimited number of flavors available.  All these changes were quite subtle to me are. I am sure others feel they are dramatic.

I started the final listening session with a Holly Cole hi-res HDTracks DSD128 album Holly. Bass is full and solid. The mids, liquid, and her smokey voice very seductive on “Teach Me Tonight”

I pulled up a 1983 Benny Carter album, Summer Serenade, great music, good recording, this one was a hi-res DSD128. The title cut “Summer Serenade” just held me spellbound. The low-level detail provided by the TU-8800 just kept pulling me in deeper and deeper.

I was introduced to the Hazelrigg Brothers at CAF 2018. They are from Doylestown, PA. If forced to classify their music I would have to say “Jazz”. But I think it goes far beyond this simple classification. It is some of the most compelling music I have ever experienced. True musicians that ”love of the craft” is so evident that you are solidly glued to the listening spot. It is unbelievable that three musicians can produce so many layers, each layer a stand out with this amp. Their one available album Songs We Like, delves into songs of the sixties and seventies and works with the essence of these songs and presents their version to the world. The Tu-8800 had not problems delineating all these layers.

I believe I was introduced to Elephant Revival on a PBS special. This is another hard to classify this music. A progressive country/folk with an edge. Their last album(2016) Petals is unique on its own. Beautifully recorded with lots of depth. The music is so absorbing that you quickly become unaware of your music system. Bonnie Paine, lead vocal is in “total control of your TV”(sic). The TU-8800 disappears as it should. On Elephant Revival’s website, it stated that they have taken a hiatus from performing and recording. I do hope they come back soon.

Tommy Emmanuel is another artist I was introduced to through PBS. His artistry on the acoustic guitar is mesmerizing. He gets more different sounds off a box with strings than anyone else. The joy he gets from performing comes through each song. I dug up one of his live albums, Center Stage. With the KT88’s cruising in mid mode, the mid-range of his guitar just glows. To say he plays the guitar percussively is an understatement. The leading edge for his body slaps or knocks just keeps you on the edge of your seat. This amp handles anything I throw at it. There is on cut on this album “Mombasa” that starts and ends with an amazing percussion solo. This solo is performed on the guitar by Tommy. It is one of the most amazing “drum” solos I have ever heard. The leading edge of the slaps, bangs, ticks, and pops just emerges from the phantom center and penetrates your soul. Again, the quickness of the TU-8800 in Pentode mode is most evident. 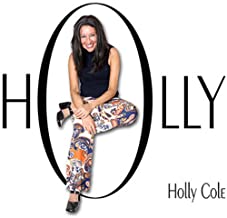 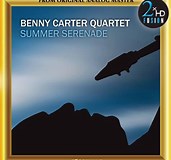 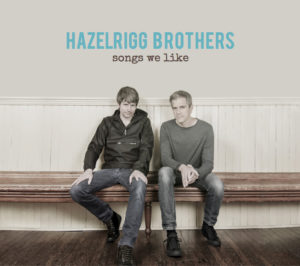 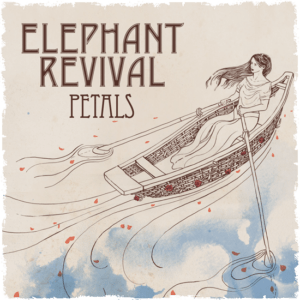 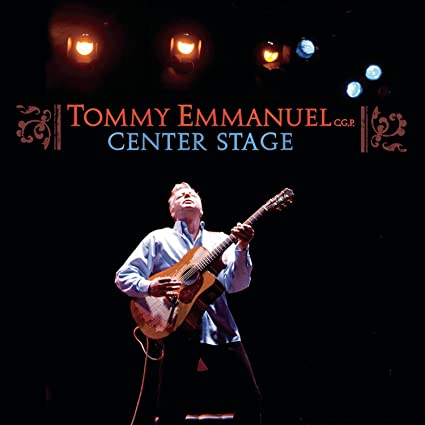 I like the sound of this amplifier quite a bit. Its versatility makes it a chameleon, very changeable in its tonal character. It was fun building the kit and one does get that proud feeling of accomplishment, especially to have it work right off the get-go. This amp will provide many hours of great sound and entertainment for those who like to fiddle with the different modes and tubes you can roll in. However, I am not a fan of the looks. I have mentioned in a previous review that I do not like equipment that calls attention itself, either in looks or sound. The TU-8800 is so “plain-jane” looking that it stands out on the other side of the pendulum.  The casework is minimal, and the ivory paint is not for me. Yes, with the sound, you are getting a bargain. With all the upgrades you are talking around $2100. I think I can live with this amp for quite a while, but at that price, I feel it should look more the part.